Given that this will be the 20th annual Mysterium, and that it’s in Spokane, we felt like we needed to do something extra special. So, we’ve been calling in favors and reaching out to as many special guests as we can find from across the Myst series. We will have a number of guests in attendance for Mysterium 2019. You can find out more about them below.

We'll be announcing more guests in the coming months, so be sure to check back periodically! 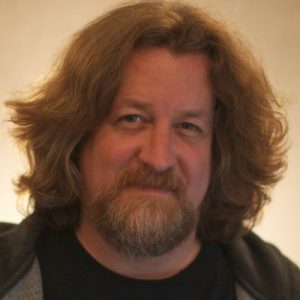 Russell Brower is a three-time Emmy Award winner, Composer, Musical Director and Conductor. For over a decade, Brower was the Senior Director of Audio and Lead Composer at Blizzard Entertainment, developer and publisher of the World of Warcraft, Diablo III, StarCraft II, Overwatch and Hearthstone franchises. Previously, Brower served as a Principal Media Designer and Music Director at Walt Disney Imagineering, creators of Disney’s theme parks worldwide.

As an independent composer and sound artist, he has worked on such projects as Animaniacs, Batman: The Animated Series and many other series, specials and films. He serves on the Boards of Directors of the Society of Composers & Lyricists and the Game Audio Network Guild and is a member of NATAS and NARAS, and is a Film Scoring instructor for the UCLA Extension Program. “Invincible”, from his score for World of Warcraft: Wrath of the Lich King, made its first appearance in the Classic FM Hall of Fame Top 300 in April 2014 at no 52.

Myst fans will know him best from Cyan’s most recent Kickstarter campaigns. For the Myst 25th Anniversary Kickstarter, he composed several Myst-inspired musical pieces available to backers, while the Firmament Kickstarter announced that Rusell will be lead composer and music supervisor on Firmament. 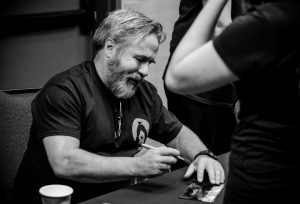 Chuck, along with Robyn Miller, created the artwork that brought the worlds of Myst to life. After Myst, he worked on a number of other games, including a number of titles at Westwood Studios. He has created artwork for TV shows like Babylon 5, Crusade, and Mortal Kombat Krusades, as well as for motion rides like “Star Trek: The Experience” and Disney’s “Mission to Mars”. Chuck currently heads Eagre Games.

Eagre’s first game, ZED, will be coming out this spring. It will be published through a partnership with Cyan Ventures, Cyan’s new VR publishing arm. 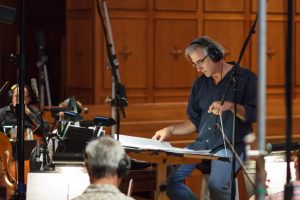 Tim’s history with Cyan started as sound designer for Riven, and later as the Audio Director and composer for URU and Myst V.

Tim Larkin is currently working at Valve having composed music and created sound design for games such as DOTA 2, CSGO, Half Life 2 Ep 1 and 2, Portal 1 and 2, Left 4 Dead 1 and 2 as well as the most current score for Artifact which can be heard at https://soundcloud.com/timlarkin/sets/artifact-soundtrack.

Tim still lives in Spokane where he enjoys the benefits of the Inland Northwest outdoor lifestyle.

More info on Tim can be found here:
https://en.wikipedia.org/wiki/Tim_Larkin
https://www.imdb.com/name/nm1265003/ 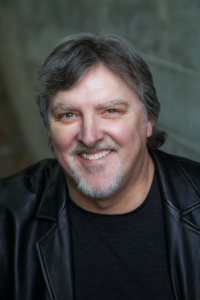 Marty O’Donnell earned his Masters of Music Degree in Composition with honors from USC in 1981. He then founded the Chicago-based commercial music and sound production company, TotalAudio, writing and producing numerous film scores and jingles such as Flintstones Kids and Mr. Clean. In 1997 he produced sound design for Cyan’s Riven, the Sequel to Myst, and created all of the audio for Bungie’s award-winning Myth series.

In the spring of 2000 Marty accepted a position as Bungie’s Audio Director and Composer, where he worked on developing Halo for the launch of the Xbox. The audio and music for the Halo series has received numerous honors and awards, including the Game Developers Choice Award, the Edge Award, Rolling Stone Magazine’s Best Game Soundtrack, and Best Sound/Music from the AIAS, IGDA, GANG, TEC, and Spike TV.

In July of 2007, Marty helped to lead Bungie in regaining its independence. His final project with them, Destiny, featured music in collaboration with Sir Paul McCartney. In addition to creating and overseeing sound design, music, and implementation, Marty also did the casting and directing of all the voice acting for Bungie’s games. The music and audio from Destiny have won several awards including Best Audio and Best Music from the AIAS. He was awarded GANG’s Lifetime Achievement Award in 2016.

Marty is co-founder and co-owner of Highwire Games in Seattle. Their first title, Golem, is an exclusive title for Playstation VR and will be released in 2019. He has also composed and produced Echoes of the First Dreamer, the musical prequel to Golem, which is currently available. 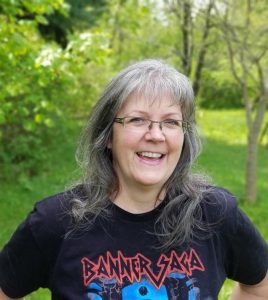 Kha’tie has been a Myst fan since 1995, when she and her then new husband Rick (aka “Timeposter”) played with a small group of friends on a borrowed computer. She soon discovered the incredible Myst fan community online, first in Cyan Chat, then on the Lyst, and later in Myst Community, where she learned a ton about community and how to best manage them.

After volunteering as a Community Manager for a few years, she got a job at Ubisoft as Community Manager for Myst Worlds in 2003 during the development of Uru (and the secret development of Myst IV). After Myst V and the Uru sequels launched, she moved to other studios including Cartoon Network, Gazillion, Disruptor Beam, and Stoic, and worked on titles including Stargate, Star Trek, Marvel, and Game of Thrones. Since the Myst 25th Kickstarter, she has been working with Cyan as a community, social media, and marketing management consultant and is extremely happy to be ‘home’ again. 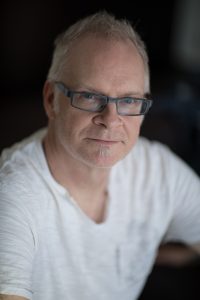 Jack Wall is an ASCAP award-winning and BAFTA nominated composer best known for his rich, cinematic scores found within popular video game franchises such as Call of Duty: Black Ops 2, 3, & 4, and Mass Effect 1 & 2. Most recently Wall scored the supernatural drama television series Shadowhunters: The Mortal Instruments airing on Disney’s Freeform TV as well as the latest record-breaking entry in the blockbuster Call of Duty series, Call of Duty: Black Ops 4. He has also written additional music score for numerous other TV series including the fantasy drama series Reign on the CW and Emerald City on NBC as well as scoring the hi-octane action film Hard Target 2 available on Netflix.

However, Myst fans will know him as the composer of the beautiful soundtracks from Myst III and IV. Composing for and conducting a full symphony orchestra and master chorale, Wall first garnered attention with his dramatic score for Ubisoft’s Myst III: Exile, receiving universal critical acclaim including several Soundtrack of the Year honors. For the climactic sequel, Myst IV: Revelation, Wall was awarded Music of the Year at the Game Developers Conference.